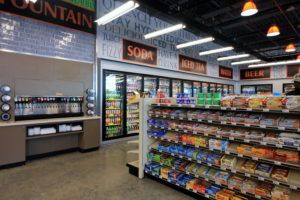 The ZOOM™ gas station, convenience store and car wash is a unique pit stop for fuel and food that is powered entirely by solar energy and offers customers locally-sourced foods and healthier snack options, plus job opportunities for area residents.

In addition to the typical products sold at most convenience stores, ZOOM also offers fresh produce and local artisan products provided by St. Louis area entrepreneurs and Good Natured Family Farms, an alliance made up of 100 family farms located within a 200-mile radius of Kansas City, MO. Locally-sourced food offerings at ZOOM include a variety of jams, jellies and pickled items from Blackberry Hill Farms in Rich Hill, MO and honey from Hawley Honey Bee Farm in Iola, KS. 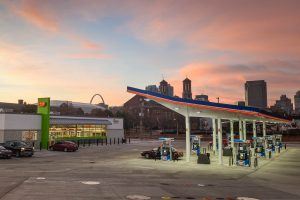 Manufactured by Prism Solar Technologies, the glass-on-glass solar panels are capable of generating 35% more energy per Watt than traditional modules through its use of advanced bifacial N-type silicon cell technology that can generate electricity on both its front and back surfaces. The panels also offer exceptional performance in low light conditions due to the additional energy produced by its back surface, which allows ZOOM to maximize its solar investment.

ZOOM’s high-tech solar panel system is expected to produce energy equivalent to 216,208 lifetime gallons of gasoline not consumed, 2,014 new trees planted each year, 722 lifetime tons of recycled waste and a lifetime of 438 cars taken off the road.